Jeff Goldblum has been Hollywood’s resident dandy for the best part of 30 years, a role he plays with mumbling, purring, subtle and not so subtle sexual aplomb. From the open black shirt and bare naked torso from Jurassic Park to the white linen suit and raffishly draped pink scarf in The Life Aquatic with Steve Zissou, Goldblum has played some damn stylish men through his movie career.

But it’s his own style that really revs his fandom (mostly middle aged women, go figure) into a sweat, as well as the fact that trying to find anyone who has a bad word to say about him is harder than trying to get him to stop smiling.

Saint Laurent is a favourite, the luxury French fashion house with a timeless chic that fits the 65-year-old’s super cool persona down to an exquisitely fitted polo tee. Over the top, you’ll see him in a leather jacket, matched with a fedora hat and some foppish Oxford shoes. The actor is also a jazz pianist and Goldblum clearly has affection for that beatnik look championed by the genre’s greats in the 1950s.

This is perhaps where his fondness for turtlenecks comes into play, worn under a leather (again), denim or suede jacket (Goldblum likes a cool jacket). His tailored looks are slim and trim, ties are usually skinny and his trousers tapered and cropped, expertly crafted to fit his gangly 6’4″ frame.

Jazzy Jeff looks as sharp as a razor in this slim tailored get-up. When standing up the rule is usually to keep your suit jacket buttoned up, but by letting the jacket fly open Goldblum lets his crisp white shirt contrast with the all-black suit and allows people to see the coordinated perfection he has going on with the dainty brogues on his feet. A white shirt also offers a blank canvas allowing Goldblum to easily plump for a preppy stripe in a less traditional skinny shape.

Ever the gentleman, Goldblum knows he has to stand out at the ball to keep up his street cred as the world’s best dressed pensioner, but not so much it overshadows his wife. A white, shawl lapel dinner jacket is therefore the best way to go, being a slight rebel by changing one element of the uniform while keeping everything else as classic as can be. And if it’s good enough for Bond… Mr Goldblum will have two martinis, shaken not stirred, please. Smart casual is a hard term to pin down but here we’d say it’s all in the cut of Goldblum’s velvet blazer. Relaxed and looser than the jacket is on a suit, it’s a comfortable fit without the stiff formality that comes from padded shoulders and shiny worsted wool. Put simply a blazer is made for when you want to dress down smartly worn expertly as a separate with some slim fitting chinos. Khaki is the new neutral to break up your roundabout of black, navy and greys. It’s surprisingly easy to wear, especially with fellow earthy colours like the beige of Goldblum’s cigarette shaped chinos and best of all with black like the retro-tinged and structured leather jacket. When it comes to cut make sure the bottom of the jacket sits above your waistband, you want to channel Brando not Steven Segal. 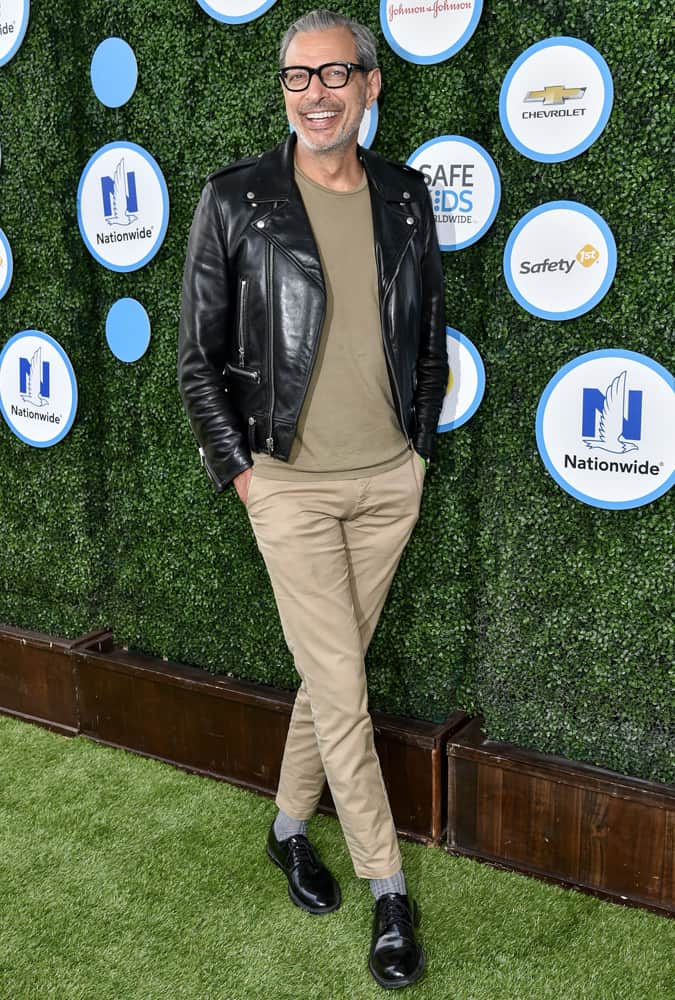 We really can’t imagine Goldblum retiring anytime soon, but if and when he does so at least he has the Riviera retirement look already down. All you need to nab the style for yourself is a striped polo, a loose navy blazer with gold buttons and some leather driving shoes a la Goldblum. Although personally, we would wear the shirt untucked, Jeff – polo shirts, for the most part, have a straight hem and are therefore made to be worn untucked. Arise sir Jeff, knight of the Hollywood realm. There is a touch of regality in the brooch on Goldblum’s lapel here, and while this is a business suit Jeff looks as classy as if he was wearing a dinner jacket. There is not a bunch in sight on the shoulders and just the half break on the trousers, while the star of the show is the texture and weightier cloth, which holds the suit shape far better than a lighter fabric. Let’s face it Liam Hemsworth, when you’re standing next to the grandaddy of Hollywood style you’ve got no chance. As we’ve already seen Jeff show, the polo shirt is as versatile as menswear comes and slid under a black suit with a failsafe black and grey combo, Goldblum looks neat and sophisticated without looking like he’s trying too hard. Wearing leather jackets past the age of 50 can be risky business and one that is likely to end up with you looking like a former 70s punk rocker on the last leg of your 18th reunion tour. Goldblum’s lifestyle pays dividends here though, a tribute to how a clean lifestyle can be your best friend in the style stakes. But there’s also something to be said for a high-quality leather jacket – you can tell by the thickness – that will only get better with age as you do, just as Goldblum has here. Granted there is something of the mafioso about Goldblum’s style here, but there’s a mastery of textures you just wouldn’t get from anyone but the don. From the thick woollen overcoat to the shiny lapels and tie, texture and details are how you prevent the all-black turning your look into that of an emotionless bouncer secretly wishing they could spruce up their outfit with some ornately detailed brogues. The Best Dressed Man In The Office

Goldblum is a master of making smart look effortlessly casual without having to reach for the luxe bomber jacket. His mastery comes from his choice of fabrics – take the seperate blazer here which at first glimpse looks like it’s from a suit until you notice the lighter fabric which just takes a welcome load of off those shoulders. Also top marks for the tonal matching of the flecks of blue in the jacket and that that metallic shade in the shirt. When slipping a jumper under a jacket make sure it’s not too chunky. Goldblum knows the rule, mainly that layers should get thicker the further away they get from your body lest you start resembling the Michelin man. Also if you’re going for a looser fit in the denim jacket, follow Jeff’s lead and choose a slim fitting trouser for that all-important contrast. The excitement over the blouson has died down in recent months, but as a piece in a preppy summer look, it’s hard to beat. The blouson is also easy to wear and as such shouldn’t feel like it’s tying your midriff up in sausage casing so wear it roomy and with a relaxed fit trouser on your bottom half to keep the proportions of your outfit tip-top. Texture, texture, texture. It’s the only way to break up all black everything. So how else does Goldblum get away with wearing a kimono despite being, y’know, Goldblum? Well, you do have to admire how bang-on he has his classics in this look, from the bunchless shoulders on his impeccable overcoat to those shiny Chelsea boots highlighted by the crop on those smooth pleated trousers. Even if Goldblum still looks like a jedi warrior managing a Prada store, he has our sword (or lightsaber). Getting up close and personal with one of his former co-stars (no, not Will Smith), Goldblum mixes up his usual turtleneck under a jacket look with a much lighter tonal shade and the addition of luxurious suede. White jeans play the neutral here, with Goldblum also opting for a risky pale shade of yellow that only just about works because of the Hollywood stars deep tan – lucky mucker. These 1980s boxy coloured suits are all the rage on the catwalk, so ever the fashion pioneer Goldblum is slightly ahead of the curve with this pastel blue. Granted, though the boxy cut does somewhat drown Goldblum’s lithe upper-body and looks odd on top of the slim, cropped trousers. We’d say it is better to throw your self headfirst into the trend and get the trousers in a looser, sashaying fit. Connect with:
Facebook Google Twitter
Don't have an account?
sign up
Back to
log in
Connect with:
Facebook Google Twitter
Back to
log in
Choose A Format
Story
Formatted Text with Embeds and Visuals
Personality quiz
Series of questions that intends to reveal something about the personality
Trivia quiz
Series of questions with right and wrong answers that intends to check knowledge
Poll
Voting to make decisions or determine opinions
Ranked List
Upvote or downvote to decide the best list item
Video
Youtube, Vimeo or Vine Embeds
Meme
Upload your own images to make custom memes
Open List
Submit your own item and vote up for the best submission
Gif
GIF format
Countdown
The Classic Internet Countdowns